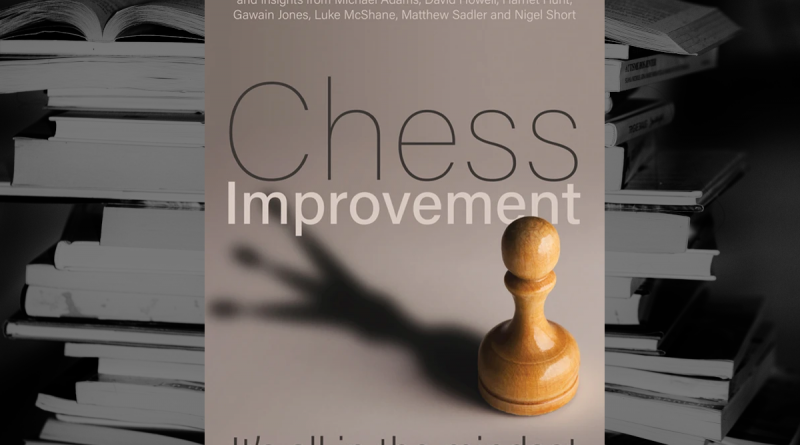 In common with many chess players, I suffer from the affliction of buying far more chess books than I read. While numerous chess books sit almost untouched on the shelf, Chess Improvement was swiftly read from cover to cover, and I'm sure I'll be dipping into it many times over the years to come.

Hymer and Wells bring their considerable combined experience to the book. Peter Wells is a chess Grandmaster and FIDE Senior Trainer, while Barry Hymer is Emeritus Professor of Psychology in Education at the University of Cumbria, and a keen chess amateur. The basic premise of the book is that many who would like to improve their chess are prevented from doing so by issues of mindset, including mistaken ideas about their own abilities and limitations. This can affect our approach to study, our ability to learn lessons from defeats, the construction of our opening repertoire and indeed even our thinking during an individual game. Much of the book draws upon interviews with elite level players from the English chess scene (Michael Adams, David Howell, Harriet Hunt, Gawain Jones, Like McShane, Matthew Sadler and Nigel Short) and is replete with anecdotes of important learning moments in their varied chess careers. Those accounts illustrate the theoretical framework of a mindset approach to learning and the importance of holding a "growth" mindset as opposed to a "fixed" one. But what are these mindsets? The authors summarise some of the important differences in this table:

The authors ably demonstrate that this is not a simple binary arrangement but more of a sliding scale and that a person can have a growth mindset about some things while having a fixed mindset about others.

Amongst the various pieces of chess wisdom to be found in Chess Improvement are some very useful reflections on the value of computer analysis and upon analysing one's own games to learn as much from them as possible. On the latter, I was struck, not for the first time, by the need to not only work out where we made mistakes but also to understand why we made them. Knowing this helps us to identify our weaknesses and perhaps create plans to address them.

While carefully refraining from overblown promises for their approach, the authors are very much committed to the idea that anyone at any stage of their chess life can profitably work to improve their game, and that the limits we sometimes put on our aspirations very frequently become self-fulfilling prophecies. Chess Improvement is, if you will, a hymn to the idea that you should "never settle" when in comes to your chess abilities. No easy answers are provided, but there is lots of great advice to the budding improver, and for chess coaches and parents of chess playing juniors. The bullet points of "Practical Implications" at the end of each chapter, largely the work of Tim Kett, are especially handy. Indeed, I'd quite like to see these turned into a little booklet in their own right.

One of the reasons I struggle with chess books generally is my relatively poor ability to visualise the position which results from a given list of moves. That's something I intend to work on (and is strongly encouraged in the book). Yes, one can get out a board and follow along, but then the mere regurgitation of moves so frequently takes over from actually thinking about the positions. As such, it came as a welcome difference to many chess books that not only does this one include relatively few games, those that are included are present more for the analysis that accompanies them than for the moves themselves. The authors are not trying to teach you how to play in such-and-such position, but to show you what and how they were thinking at the important moments. The moves themselves were almost incidental. Once I'd worked this out, I started to more-or-less ignore the games, and their accompanying move lists, and focussed only on the associated commentary. While this is perhaps not ideal, for me it was a useful compromise. I'd soon forget the particularities of the actual positions in any case, but the insights into the psychology of those playing will stay with me rather longer.

Chess Improvement has proven quite an inspirational read, and in promoting the value of hard-work, it's likely to get me working through some of those previously unread chess books I mentioned earlier.

One thought on “Book Review: Chess Improvement by Barry Hymer and Peter Wells”