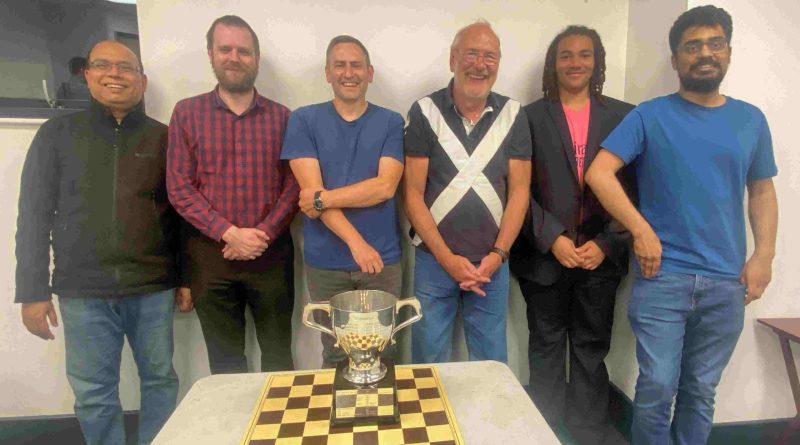 The text below is an edited version of Bob Jones' email announcing the match result to various interested parties.

For those unaware, the Norfolk & Suffolk Cup is an annual tournament for clubs that compete in either the Suffolk or the Norfolk league. Each league may decide it's own tournament format, with the winners from the two leagues facing each other in a six-board match for the final. Our club has a good record in the event, which has continued this year.

A tremendous result for the club on Tues 07 June, winning the Norfolk & Suffolk Cup! Results are listed below, and above you'll see a photo of the winning team.


The games on the top boards were particularly impressive, where Mike and Jaden beat strong opponents. Hopefully we'll be able to share a game or two from the match at some point. It was good to see Mark Le-Vine in action again, he has played only one other game this season. He fought valiantly for a win but had to agree a draw with both players very short of time. We hope he will be able to play more regularly for the Club next season.

Sadly we'll be saying goodbye to Zia this summer, as he'll be moving to Colchester in August. In his game, he managed to turn around a two-pawn deficit by creating a strong attack on his opponent's king.